Please note the final instruction set assignment is due on 09/16. After having researched and prototyped for two weeks, we’re looking for high visual fidelity (forms/materials/sounds/build quality), clear interactions (no biases) with the right affordances and proper documentation in the form of videos. Remember to ask yourself: -> In what meaningful way does the project let strangers interact? -> What did they take away from this interaction? -> How long were you able to engage them? -> How deep was this interaction?

From the last session, we received feedback in the following areas:

Upon reflection, our message on recycling is needs to be more focused and actionable.

While we desired to focus on human connection and interconnectedness of our actions, our choice of interaction does not bring attention to this sufficiently, possibly because the user experience does not make this explicit. The environmental aspect is also not apparent, as there were no clear instructions or guidelines.

Furthermore, while people have left messages with the prototypes in the past, their conceptions of the prototypes and what they do is also indeterminate.

I did more research on recycling and sucessful campaigns to do so. I was curious to find out which aspects they emphasized on, and how they crafted their messages around it. The document for my research and subsequent clarification can be found here.

I found that getting people to understand cause and effect proved to bear some results. A research showed that “providing messages with product transformation information inspires consumers to participate in recycling programs.” An example of this implementation was the “I want to be…” campaign where visitors can learn more about why objects “wants to be recycled”. This also adds an element of personification and creating an emotional connection where there was none. Waste 360, an “information, event, commerce and education provider to the solid waste recycling, organics and sustainable communities”, also suggests that “communication should be simple and digestible, with an emotional connection. Another prominent example of creating an emotional connection with faceless trash was Forky, an animated character from Pixar’s Toy Story 4. Created by a child to be a source of comfort, Forky was made out of trash: a spork, pipecleaners and googly eyes. The character has garnered acclaim from viewers.

For this prototype we wanted to test a few things: improving the visible affordances for the box (put things in and take things out and including more of an approachable trash theme. The box was made of foam core and bottles were sourced from new trash. Googly eyes were added to personify the trash. 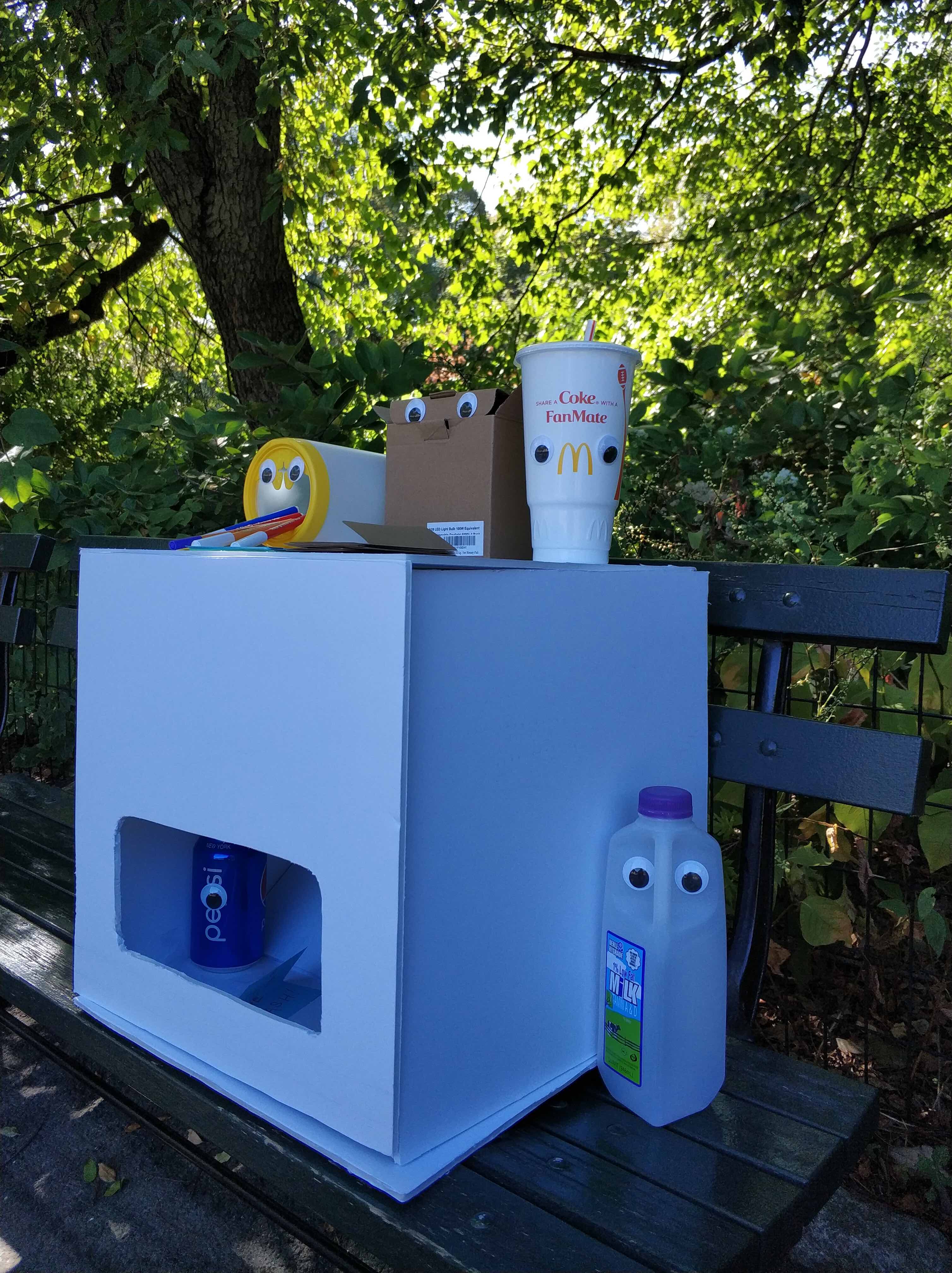 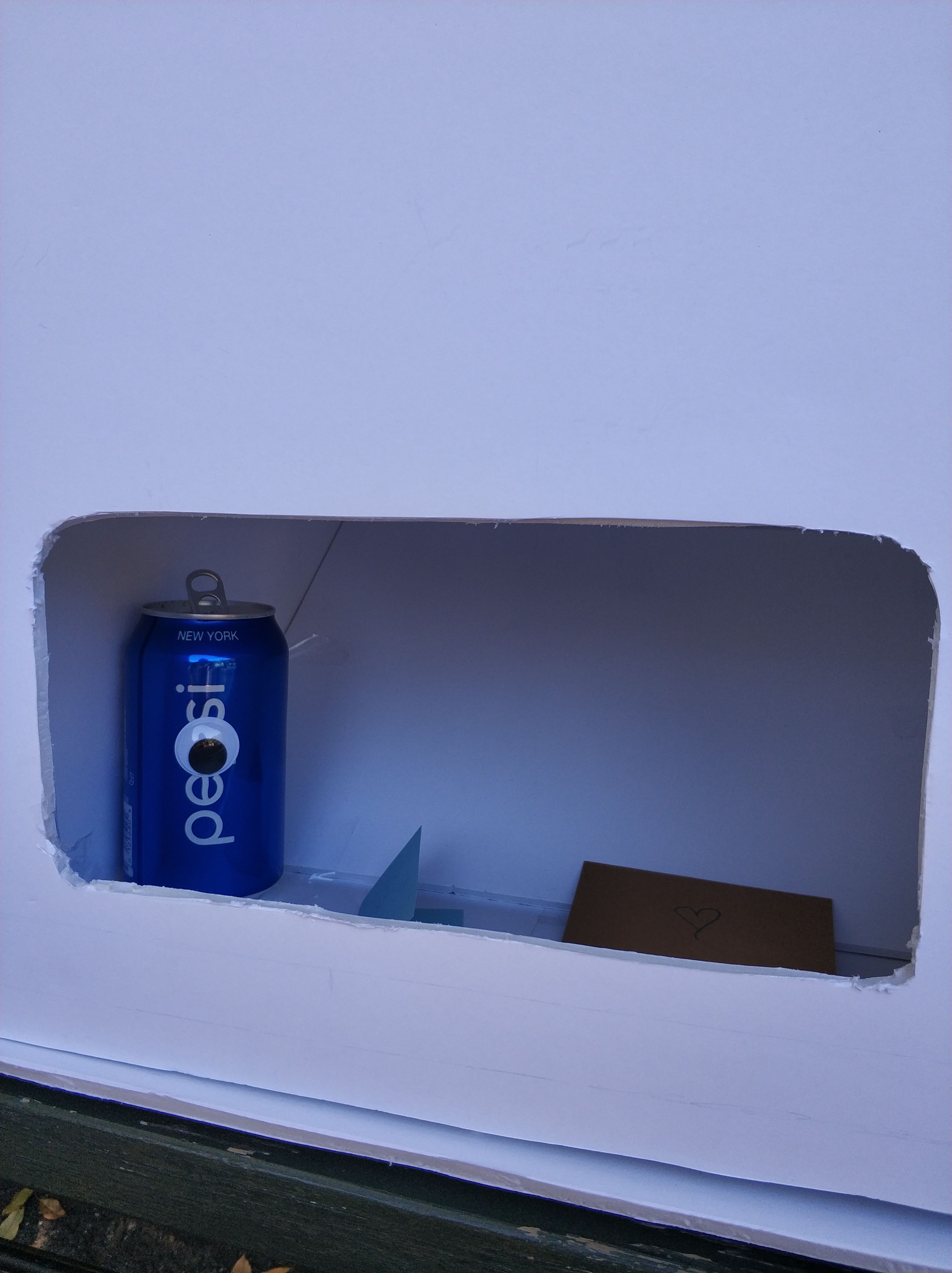 The goal was to attract attention and observe the interactions with the figures. It succeeded in getting eyeballs but again interactions were not forthcoming.

Dissatisfied with the last prototype and intending to bring more color and intention to the piece, I decided on neon pink, but sticking with the personification. To help bring more clarity I used the recycling symbol more prominently. 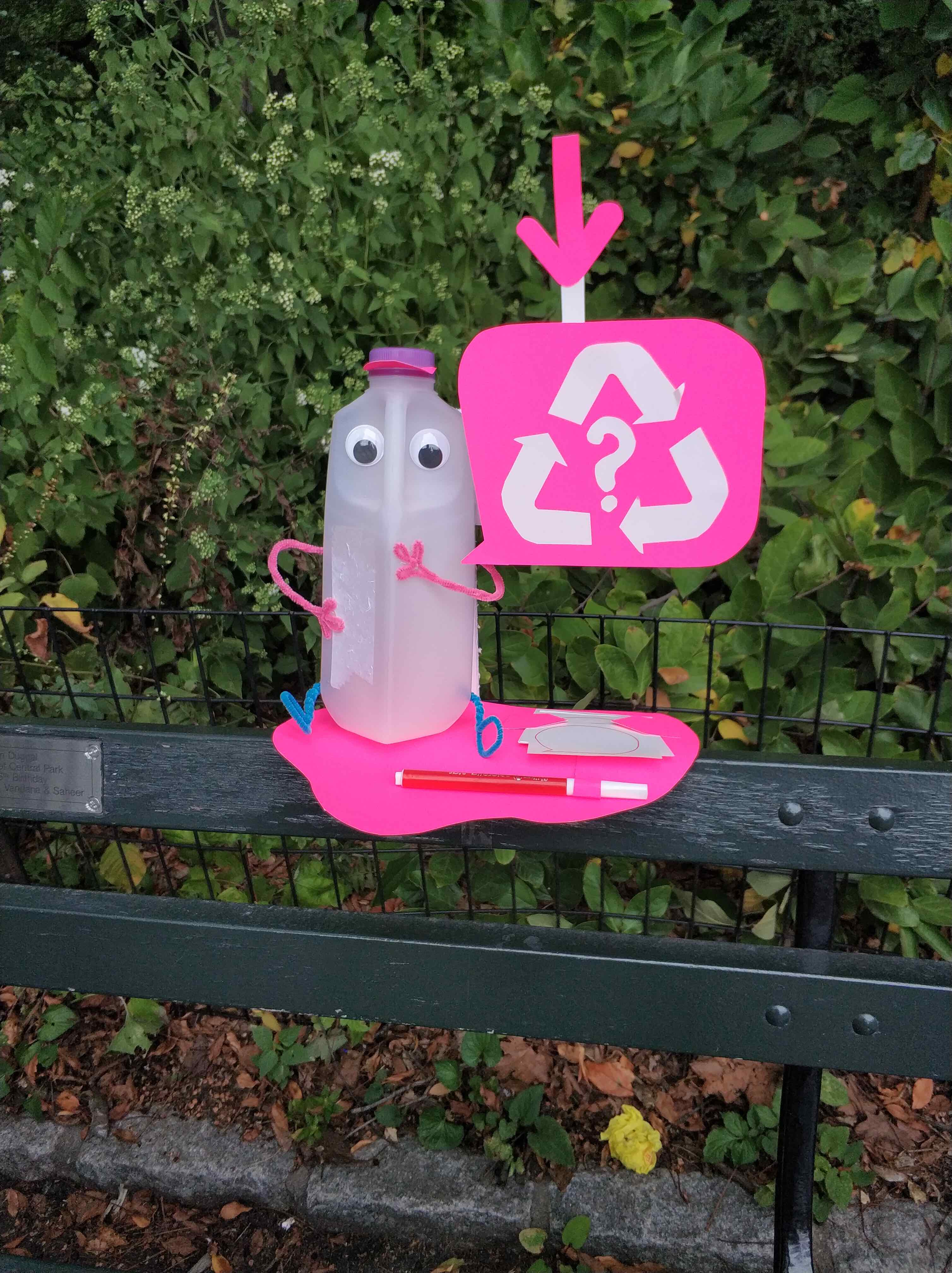 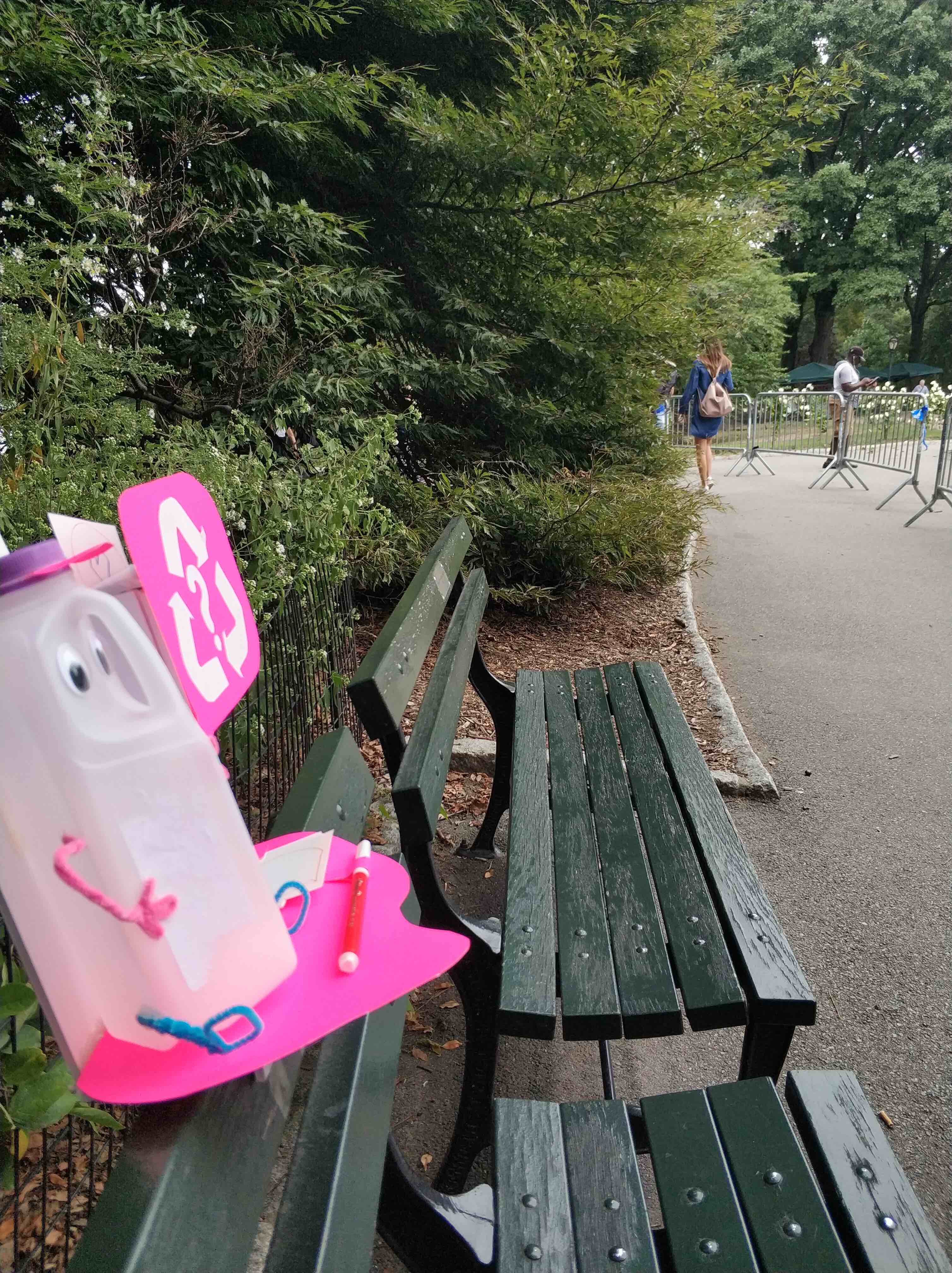 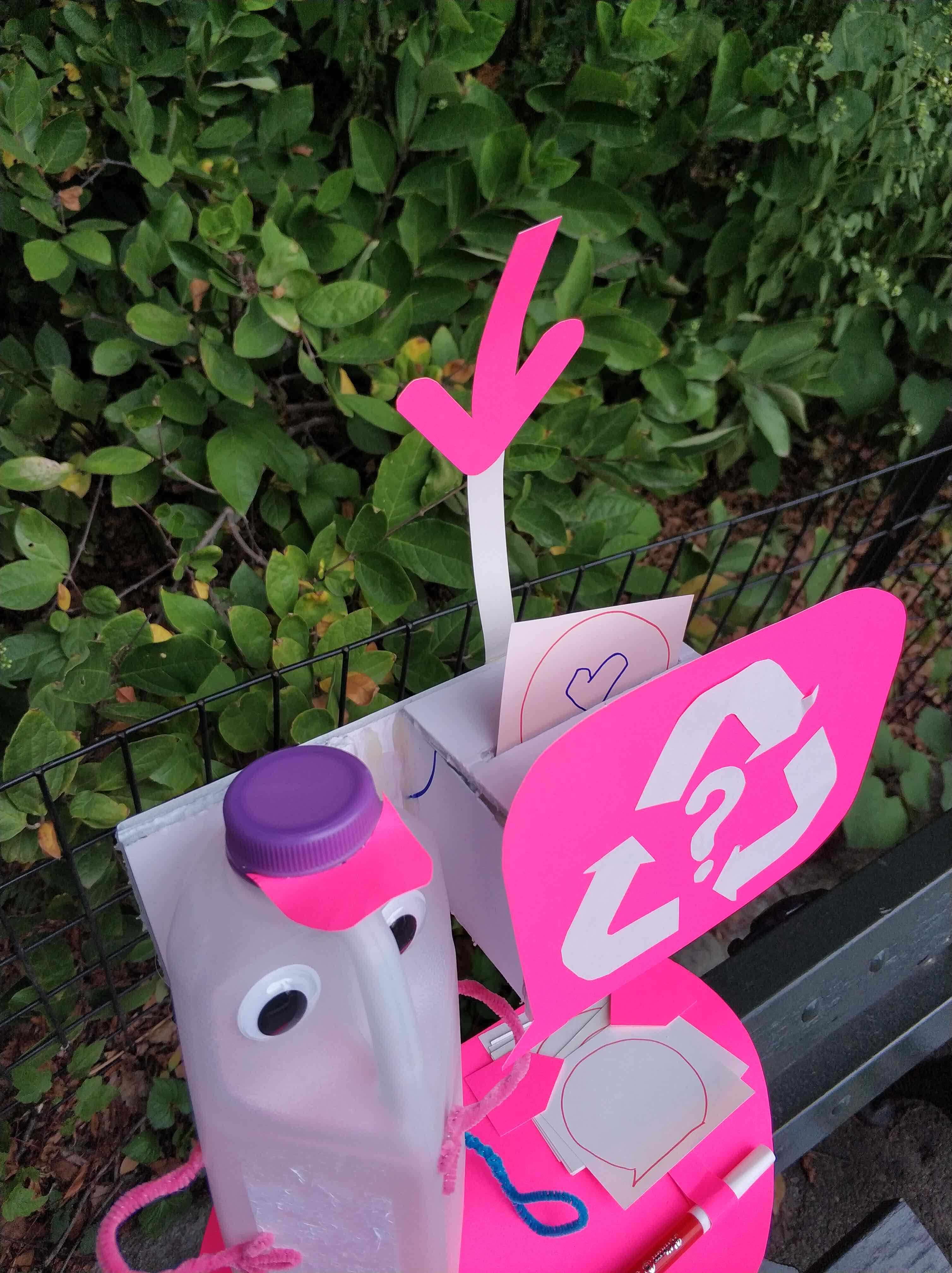 Due to the distractions of a large scale multi-screen setup, and also due to early morning hours, fewer people passed by the area, and interactions were few.

The materials matter. Using scrap materials for several of our prototypes resulted in them being dismissed as trash; googly eyes notwithstanding. Messaging without words is very difficult, symbols only hint but do not suggest enough. The size also matters, given that something small may be easily missed.